Amy and John Paul Strong always wanted a big family. The pair married in 2009 and began trying to have children shortly afterward. “I grew up in a large family—six kids—and we’re all close in age,” Amy recalls. “I knew I wanted the same.”

In the back of her mind, Amy wondered if it would be difficult for her to get pregnant. She’d struggled with ovarian cysts, irregular cycles, and endometriosis when she was younger. But confronting the reality of infertility, she said, was devastating.

After trying for a while and not becoming pregnant, Amy’s OB/GYN referred the couple to a fertility specialist. After testing, they still had no definitive reason why they hadn’t been able to conceive. The doctor recommended that they first try intrauterine insemination (IUI)—a process that involves placing sperm directly into the uterus to increase the chance of fertilization. The first try didn’t work. Neither did the second, third, or fourth.

The next step? IVF. “It is a road I never dreamed I would go down,” Amy says, “and it was a very hard, dark road.” The Strong’s first IVF cycle didn’t work. But the next time was different. Amy went to the doctor for bloodwork, and they told her they’d call later that morning. “I was on pins and needles all day,” she recalls. “My husband was traveling, and we wanted to be together when we found out. The nurse called and left a message, and it was torture not to listen.”

When they finally listened to the message, Amy didn’t hear anything different in the nurse’s voice that led her to believe the cycle had been successful. And then came the magical words: “Congratulations, you are pregnant.” The moment, Amy says, was unforgettable. “We both started crying,” Amy says, “and I’ll never forget that I said, ‘Thank you, Lord.’ Truly, without Him, it would not have been possible.”

That day marked a turning point. “My heart was full,” Amy says. “I had joy again for the first time in a long time.” Her pregnancy was easy with no sickness. Welcoming baby Lilly Grace in 2012 was a joy like no other.

Eager for more children, the couple decided to try a frozen embryo IVF cycle. The process was similar: the attempt, the emotions, and the “gut-wrenching” wait. The good memories came rushing back when Amy and John Paul got the same message from the same nurse containing the same wonderful news: They were expecting another baby. Anne Charlotte was born in 2014.

And then life really got interesting: When Anne Charlotte was just 6 months old, Amy had a funny feeling that she might be pregnant. “But I had been told we could never do it on our own, so I tossed that idea out the window,” she says. But the pregnancy test she took showed otherwise: It instantly showed a positive result. The Strongs were expecting a baby—this time with no medical intervention!

The first two pregnancies had been a surprise, Amy says, but this third one was a downright shock—and it took some time for the shock to wear off. However, welcoming baby Hudson in 2013 was a joyous experience.

The Strongs were happy as a family of five, but Amy and John Paul didn’t feel their family was quite complete. After two pregnancy losses, they again got a happy surprise shortly before Hudson turned 2: Amy was expecting again. “It was another surprise,” Amy recalls, “and an amazing feeling but also one of worry and dread. It took me several months to find peace and realize the baby was OK, and then I was OK.” The Strongs welcomed baby Ford just seven months ago.

Reflecting on the Journey

When Amy reflects on the couple’s IVF journey, one thing stands out: the realization that they were not the only couple going through the struggle. “At the time, I didn’t know a single person dealing with fertility issues,” she says. But she recalls sitting in a crowded doctor’s office, looking around at everyone waiting. “At that moment I realized we are not alone,” she says. “All of those people, strangers, people of different races and religions were all going through the same thing. We were not alone.”

Life with four kids aged 6 and under is anything but boring. It’s “wild, crazy, fun, and most of all full of love,” Amy says. “Sure, I lose my temper, kids have meltdowns, but it is real life. A life I love and wouldn’t trade for the world. We are blessed beyond measure.”

Though she admits the IVF journey was not an easy one, she is forever grateful for it. “It was hard…hard on my body, mind, and spirit,” she says. “But without IVF, I would not have my four precious blessings.”

We spoke with a reproductive endocrinologist and infertility specialist to have her answer some common questions surrounding in vitro fertilization. 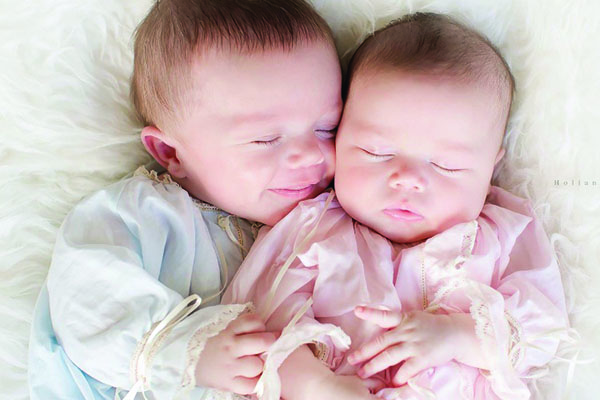